After three years of adventuring in New Zealand, I had come to Argentina to get to know my boyfriend’s home country. As we settled in the southern suburbs of Buenos Aires, where he had spent his childhood, I started to feel uncomfortable. Soon enough Argentina meant just Buenos Aires to me – busy city life, roads blocked by constant traffic, sticky air in trains where you are underneath someone else’s sweaty armpits, far away from the mountains and forests, and confined by the giant labyrinth of houses, streets and people. So many people. All the time. People I just couldn’t identify with because they were so different from the adventure-crazy weirdos I had lived with in Queenstown. Or well, maybe I was different. I lost my adventure spirit, and without realizing it became grumpy and bitchy.

I just couldn’t be the adventurous and badass, solo-traveller I was used to being!

So, I set out on a mission to fall in love with Argentina (and Chile, for that matter, as my Patagonian adventure led me to the southern parts of both countries)  as I had fallen in love with my Argentinean. First this led me to El Chalten and the mountains of the Parque Nacional de Los Glaciares for some much needed hiking and camping. 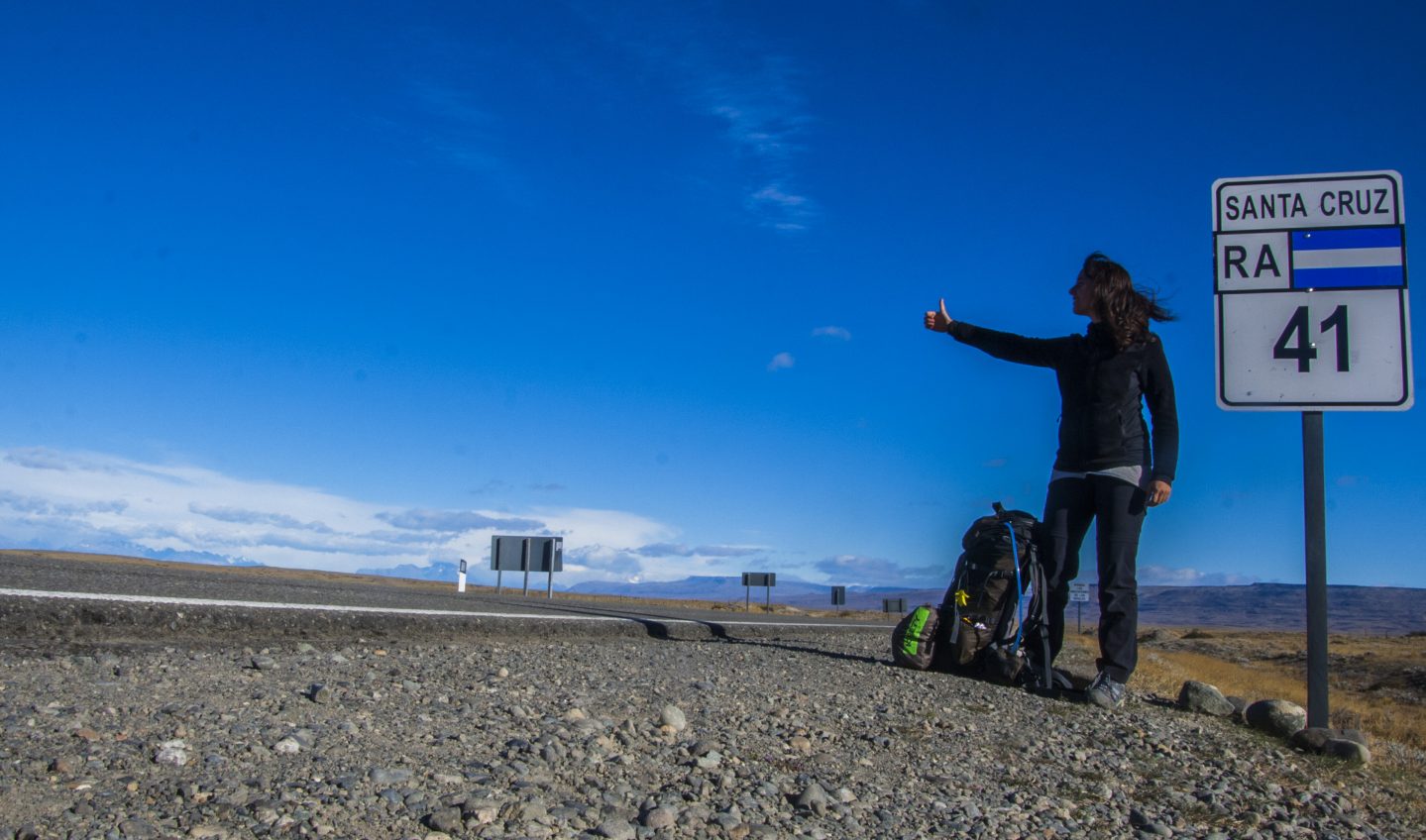 The moment I laid eyes on Fitz Roy I helplessly, head over heels, fell in love with that mountain and this country and, all over again, the amazing life I was lucky enough to be living. As I was standing at the Laguna de los tres, horrendous winds whipping painful little raindrops into my face, my freezing hands gripping onto my hat, the steep rockfaces mystically wrapping themselves in 50-shades-of-grey clouds, fighting against the winds and yelling “I can’t believe this bloody wild beauty! F### New Zealand, this is the real shit”, I felt like a burden fell off me. I must have been a curious sight to the few remaining hikers up there, laughing and crying and shouting, the lost happy and wild me coming back to life. Eight and a half weeks of solo-traveling, of exploring, hiking, laughing, talking, learning and falling in love all over again. 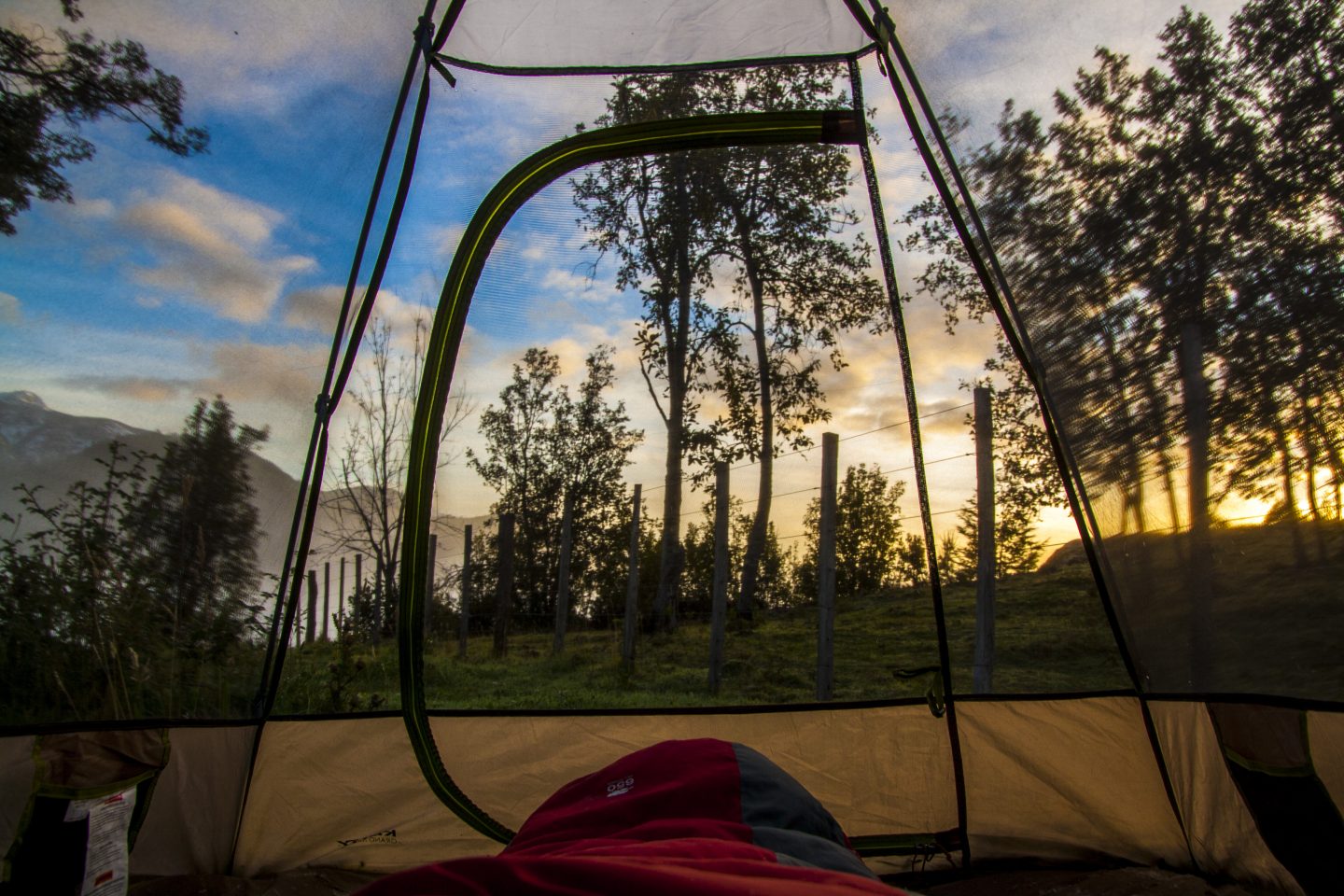 Love in Patagonia are the layers of mountains, dark green forests and the fog rising up after another rain (this is the price you have to pay for traveling this vividly green paradise in the off-season of autumn when fewer tourists are around). It’s the windswept lands in the southern parts, where you lean against the upcoming storms, struggling to stay upright, dust being swept into your face and you can see the rain coming in with nowhere to go and nowhere to hide, basically being able to count down until the rain full-on hits you again. It`s being aware of Mother Nature’s moods like never before.

It’s life uncut, that makes you feel so very alive.

It’s clouds lifting after cold days, exposing snow-capped mountains, more beautiful than ever before.  It’s also the sun! So many beautiful days when the sun is shining bright and hot from a blue sky, making her way through the shady forests you hike. It’s the yellows, oranges and reds of autumn coming in quick steps, turning the world around you into a wonderland, letting you feel the joys of turning seasons like an excited kid again. 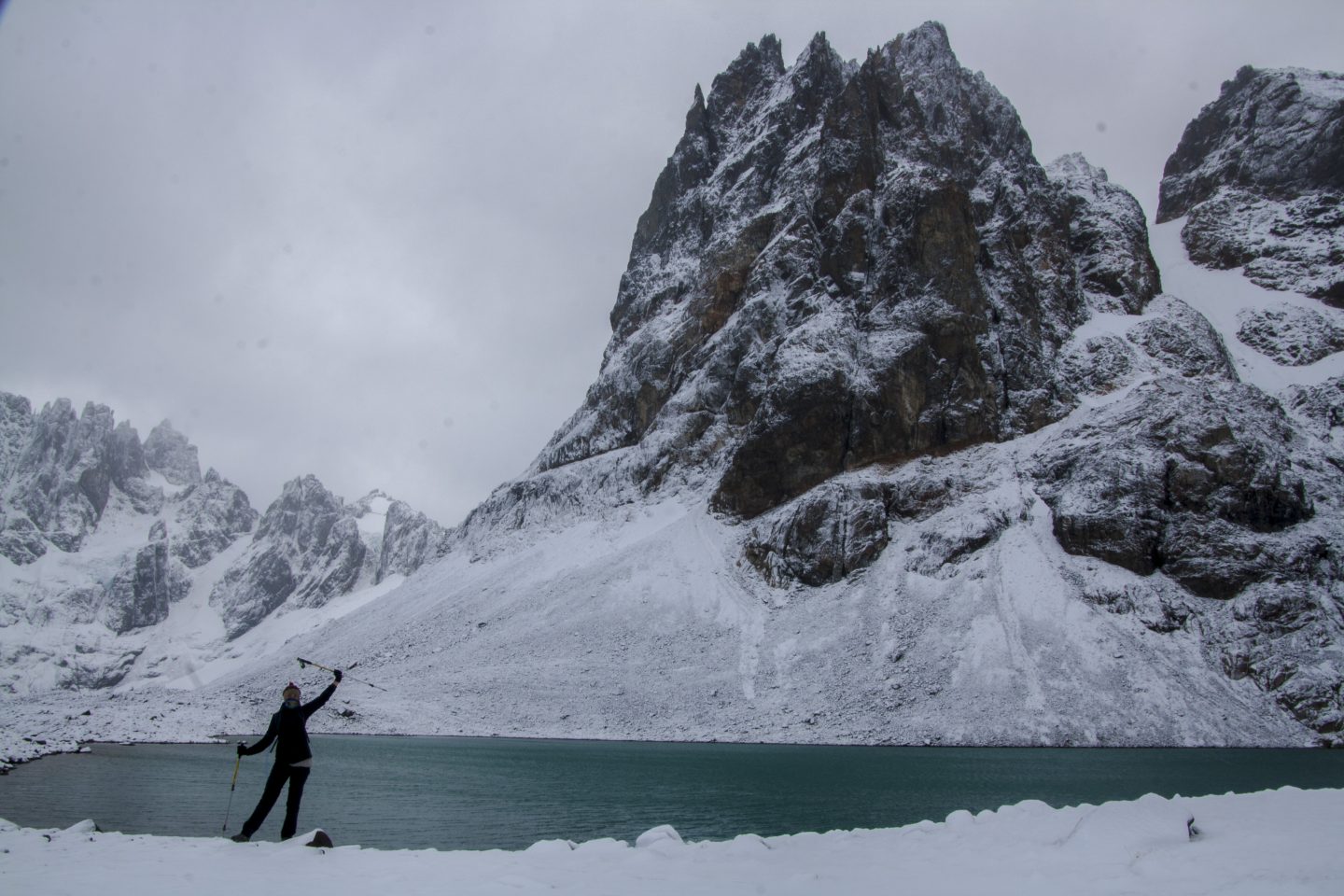 It’s the sight of a little wooden Refugio emerging from the woods after a long day of hiking, a warm fire sizzling inside and soon enough you will be sitting on a sheep fur next to it, nose stuck in a book, Mate in hand. It´s waterfalls and canyons, crystal blue and clear rivers that carve their way through the landscape. It’s falling asleep to the sound of tiny raindrops dripping on the tent, snoozing like a well-known lullaby. It’s waking up to the sun rising over the layer of fog still hanging in the valley below, slowly warming the tip of your nose sticking out of the sleeping bag. It’s a hot garden shower on a sunny morning after it’s been cloudy for the past couple of days.  It’s the rumbling of ice crashing off hanging glaciers and the thunder of water falling down tremendous heights and making for the prettiest waterfalls, leaving you awestruck in front of nature’s beauty. It’s horseback rides on Easter Sundays through rugged land and feeling you very much made all the very right decisions in life. It’s guanacos roaming the dry grasslands and foxes hiding in the bushes and gauchos greeting you from the back of their horse as they herd their cattle. It’s adventurous hikes that take you just about out of your comfort level, facing the obstacles and getting stronger one step at the time. 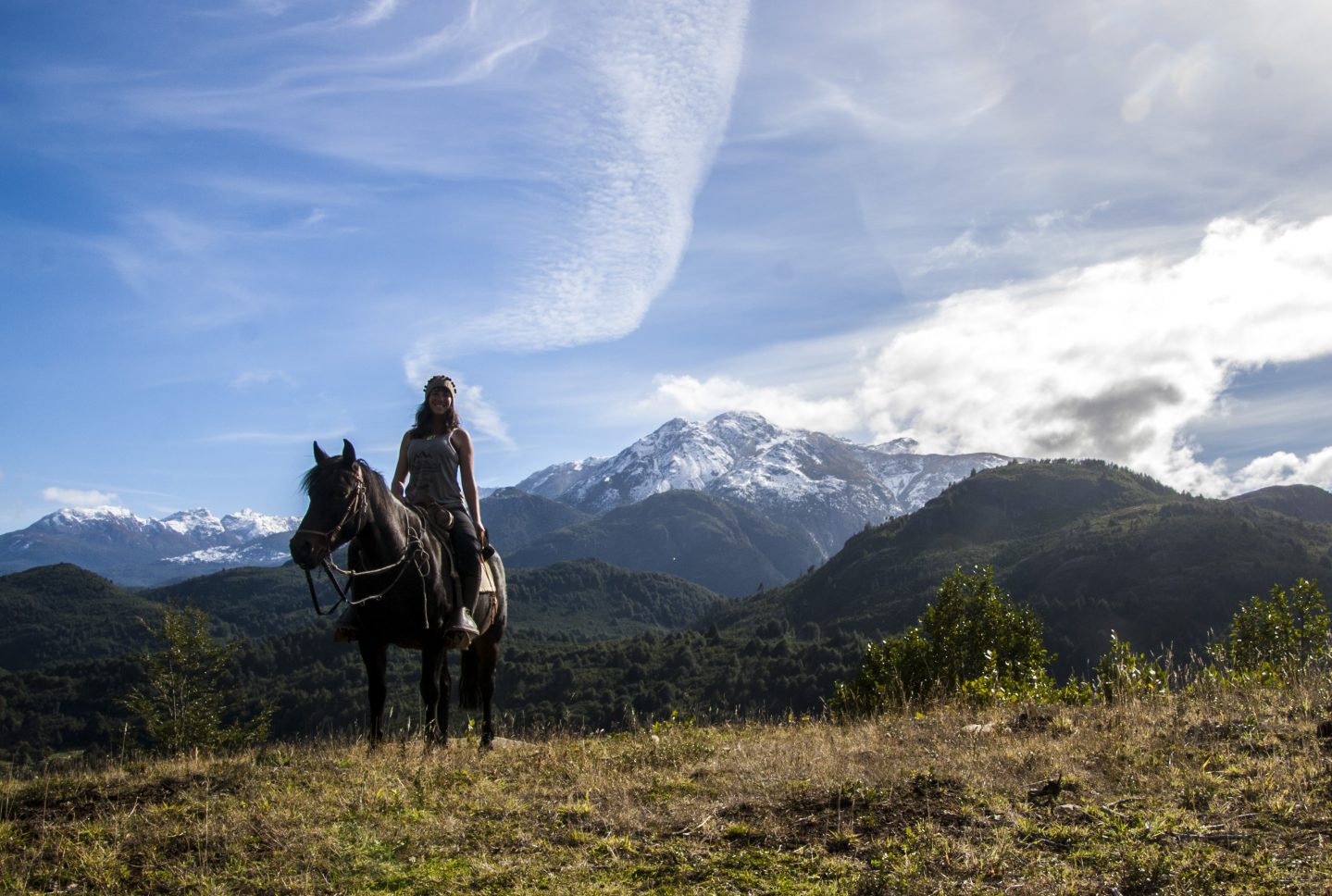 Love in Patagonia is getting to know the nicest strangers.

It’s not having to take one single bus on the whole journey as somebody was always kind enough to pick up that lonely hitchhiker on the side of the road. It’s freshly baked bread for dinner given by the Argentinean border officers and munching breakfast in the Chileans warm border office after a snowy night in the mountains. It’s Mate sipping and storytelling while being squeezed in the middle seat of a truck taking you the right direction. It’s locals patiently dealing with your just-about-acceptable Spanish and even telling you that you’re doing very well (honestly though, how is anyone supposed to understand that chilean accent?!). It’s grown man being impressed and mumbling to themselves  “Valiente. Una chica valiente.” (a strong girl) when you tell your stories. It’s having a home so far away from home as friends take you in as you were family. Mi casa es tu casa. It’s the beauty of meeting other travellers, of going a part of the way together, of meeting up later again, of sharing a second, a minute, a day of this beautiful life together. It’s those meetings that feed the soul and heart. 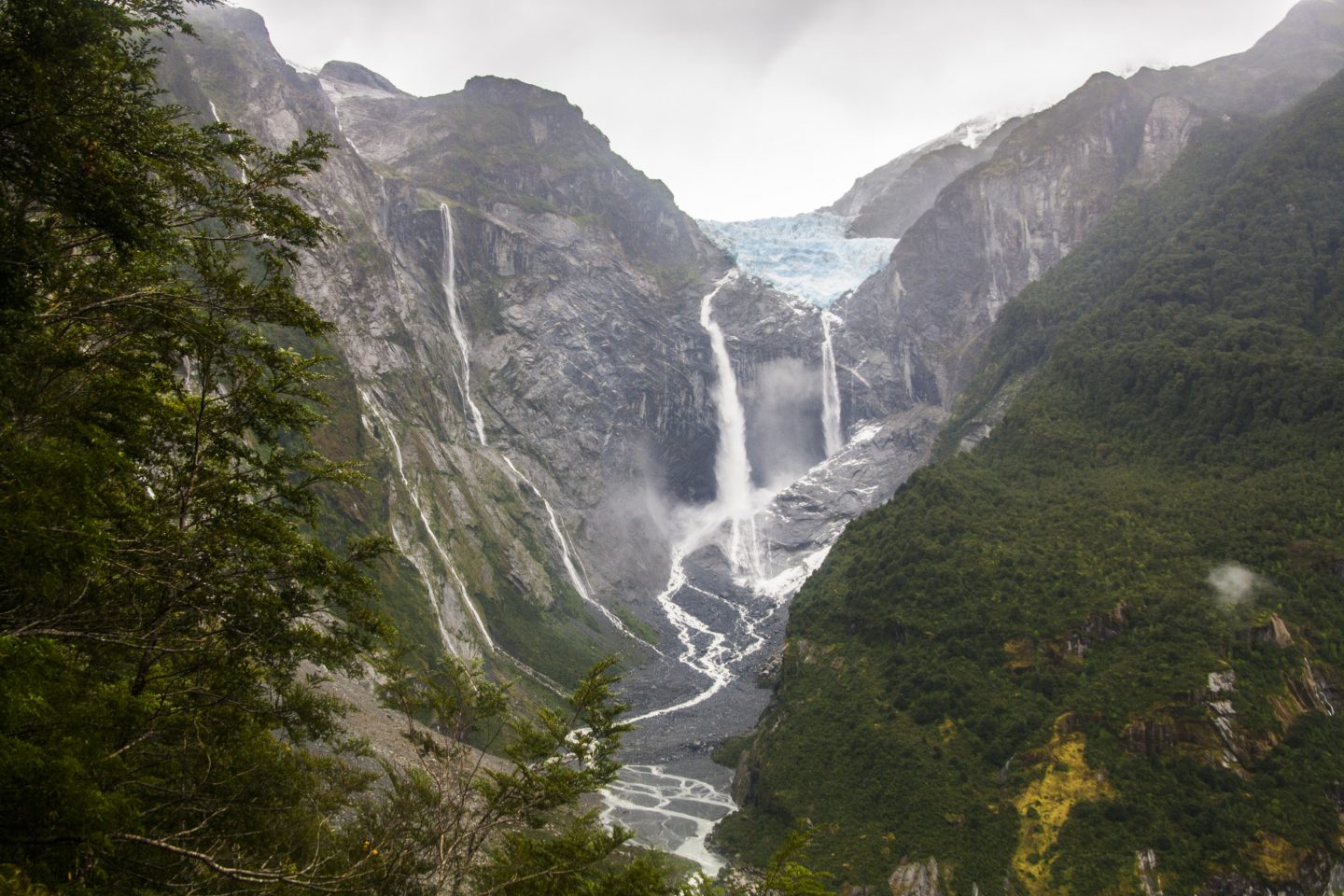 Love in Patagonia is being reminded of how life should be spent. It’s wwoofing with a young family in the mountains of Chile building up their life there. It’s mornings harvesting in the vegetable garden and cooking lunch with all the homegrown ingredients. Back to the roots, closer to nature than ever before, living life the very right way. It´s taking the kids on walks the patagonian style-the bigger one proudly riding the horse, the baby peacefully sleeping in the backpack as we make our way through the high grass. It’s asados with friends and neighbours and dancing through the Chilean night and simple happiness at it’s best. 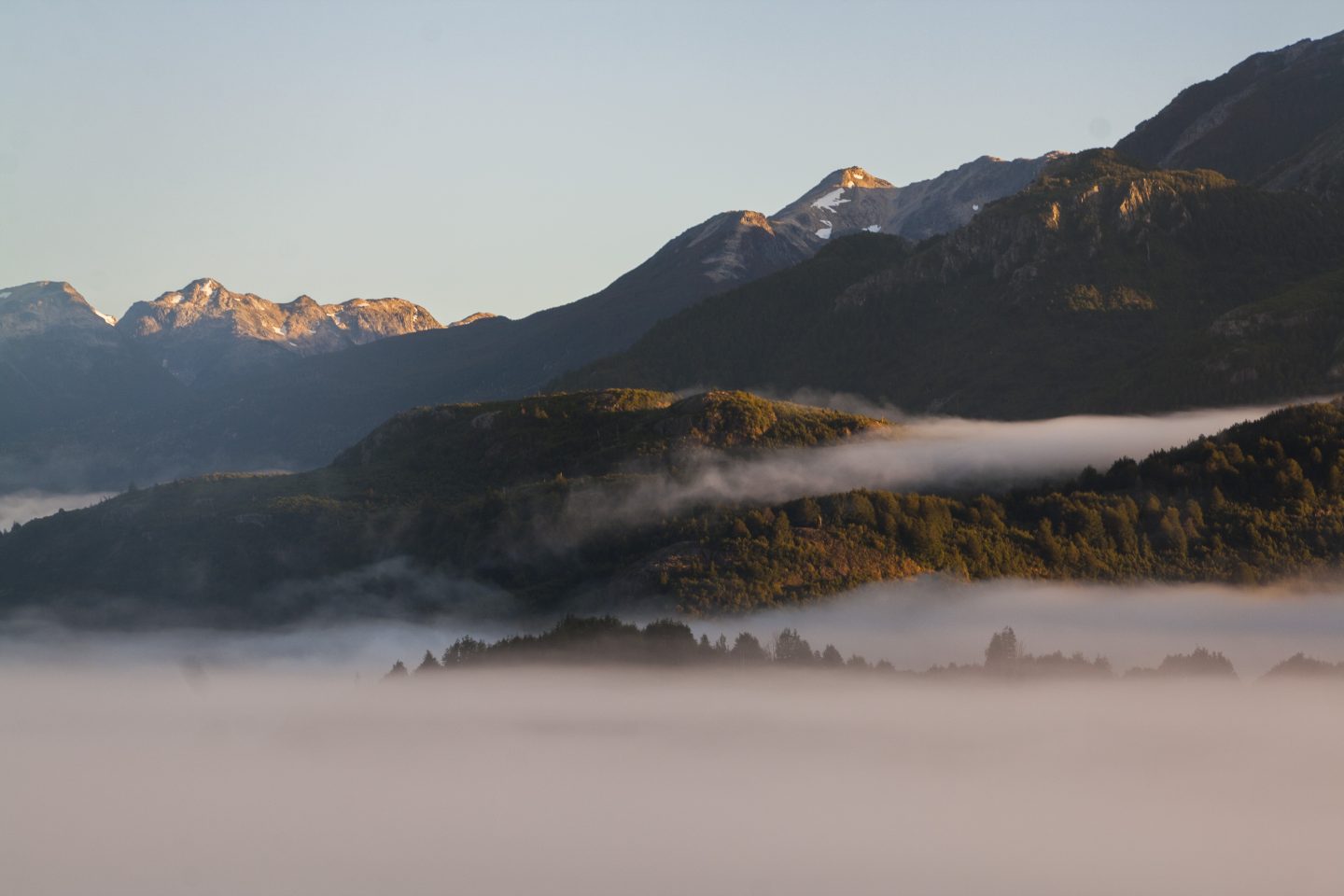 It’s all that and more. Argentina is full of places to fall in love with, I have lost my heart to Patagonia and am reminded of how to live life the right away: fearlessly roaming the wild lands. I wouldn’t even dream of leaving this incredibly beautiful continent anytime soon and already know which mountains I’ll be hiking next summer.