Whatever your mountain bike passion be it downhill, cross country, or simply meandering through ancient rainforest, the Heaphy track has something for everyone. If you are a keen mountain biker, make sure you add this multi-day ride on the bucket list.

The Heaphy had been on my own bucket list for quite some time and with an upcoming move to the North Island, it was now or never. I didn’t have much trouble convincing Matt Proctor and Dave Everton to join me for the adventure. I booked us the last weekend of the mountain bike season* and by some twist of fate managed to score us a helicopter from Karamea to Brown’s Hut! 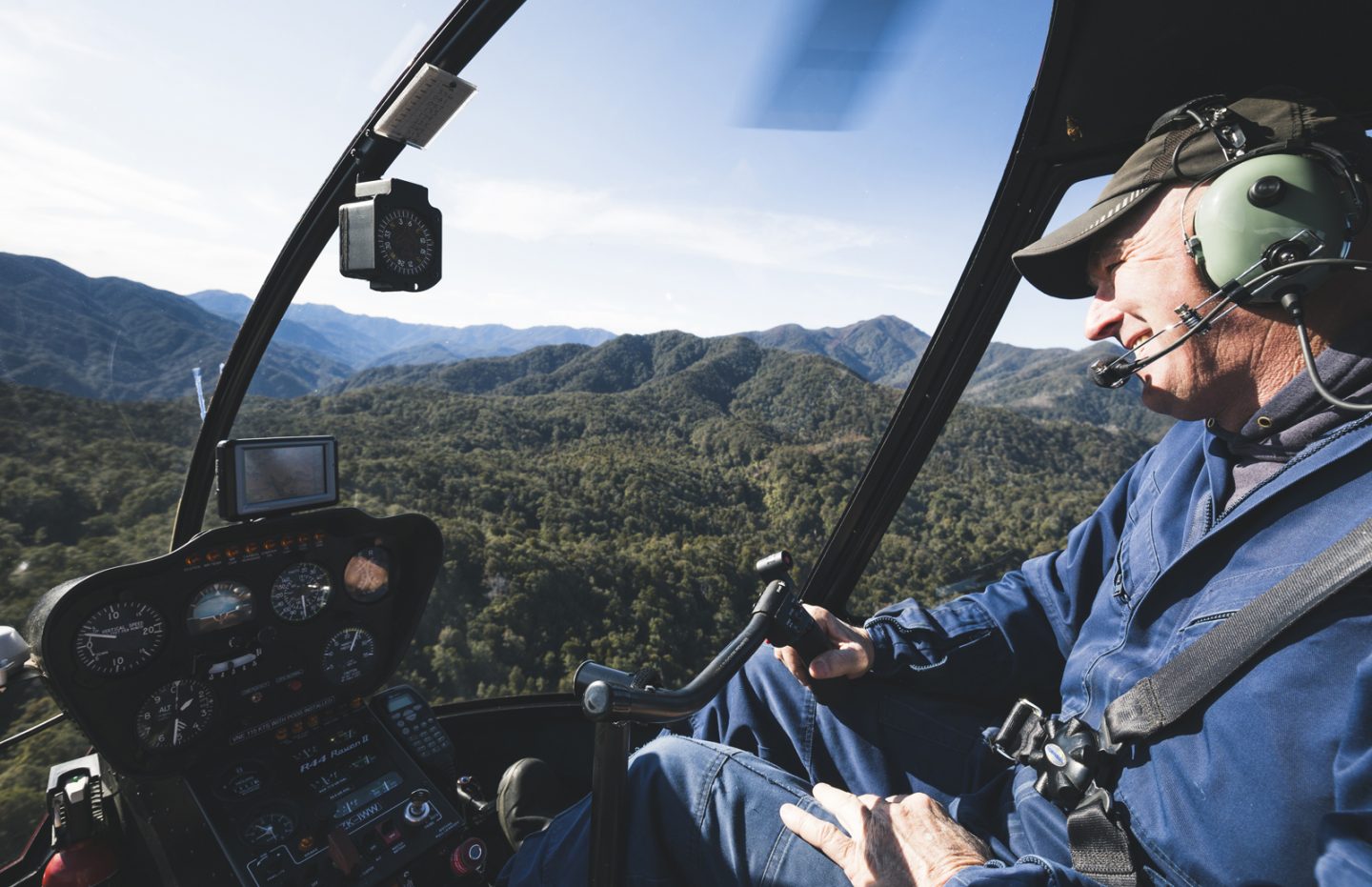 After some last minute preparations, Matt and I set off from Wanaka on our journey north. Our destination was Karamea where we would meet Dave (traveling ex Chch). We arrived on dusk at the Last Resort Karamea, a welcome sight after 9hrs driving! Matt and I both burst out laughing when we spotted Dave and what appeared to be his bike. It was covered in strips of duct tape holding together an assortment of items including, muesli bars, energy gels and spare tubes. He had even fashioned a pannier utilising PVC piping and a chopping board! It really was the swiss army knife of bikes. After a few beers and a hearty West Coast meal we crashed out for an early start the following morning. 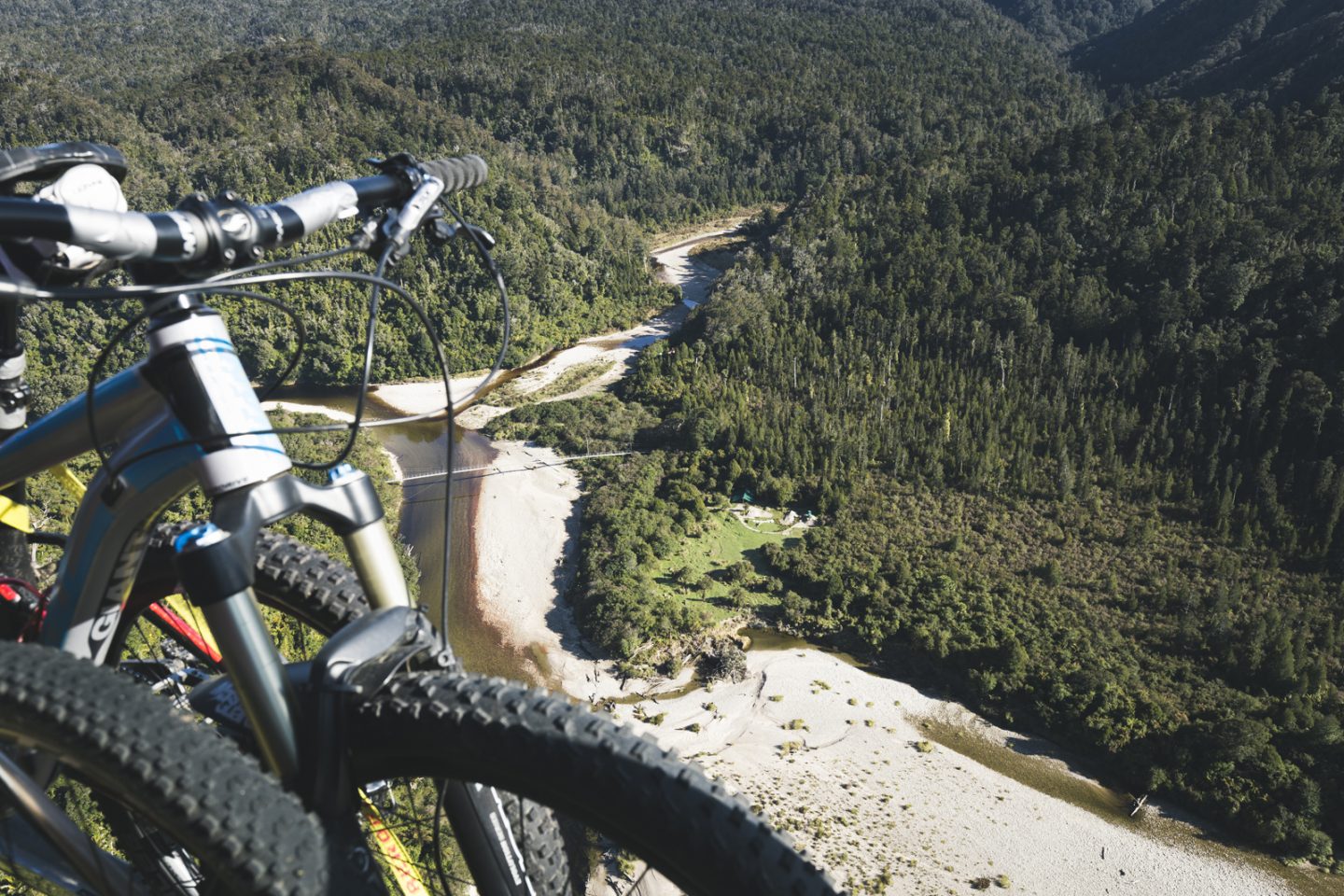 We awoke to a bluebird day and headed to Kohahai, this is the start or end of the track depending on the direction you take. Our pilot Wayne arrived in his red r44 helicopter complete with a custom built mountain bike rack. We were airborne in no time and the views along the coast were spectacular, providing a unique perspective on the track. We also spotted several mountain bikers below, scattered like ants across the landscape. Within 20 minutes we had covered the 78km and landed near Brown’s hut. As the heli disappeared all that was left was the chorus of native birds and the smell of rainforest. 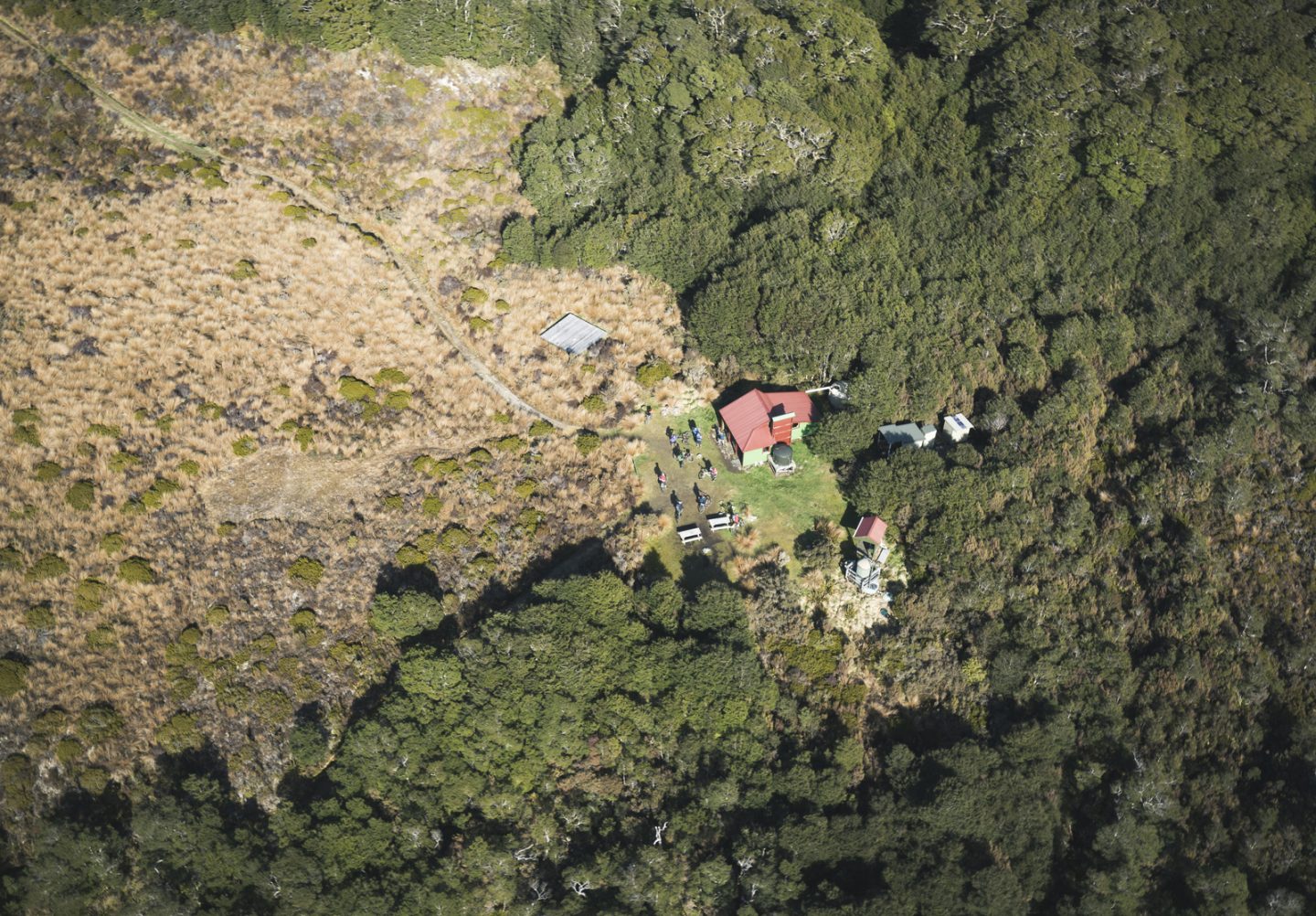 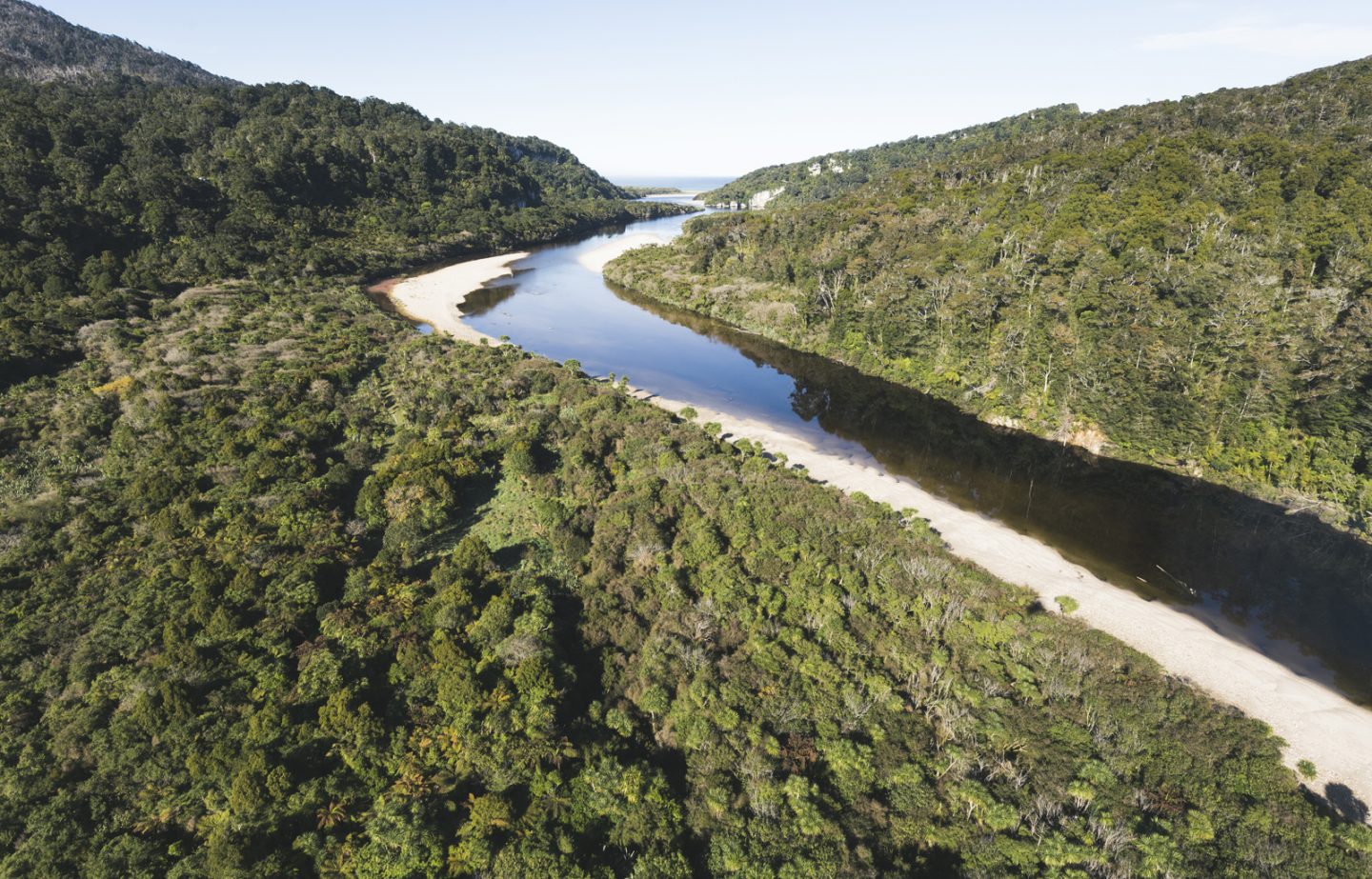 It felt great to be back on the bike and within moments we were amongst a canopy of the lush rainforest. The first day was a gradual climb spanning 17.5km to Perry Saddle hut. Along the way, we made a few photo stops and Dave even dished up some cheese and salami sandwiches on his multi-purpose chopping board. The track opened up every now and again to provide views over Collingwood and Farewell Spit. We made one last stop at the summit before a short descent to Perry Saddle Hut. The hut was a welcome sight and the panoramic views were spectacular. I decided to take a dip in the ‘mountain spa’ in Gorge Creek. I am guessing someone forgot to turn it on as the water was bloody freezing! The fireplace in the hut and some hot food soon warmed me up. We all crashed out fairly early after a big climb for us weekend warriors! 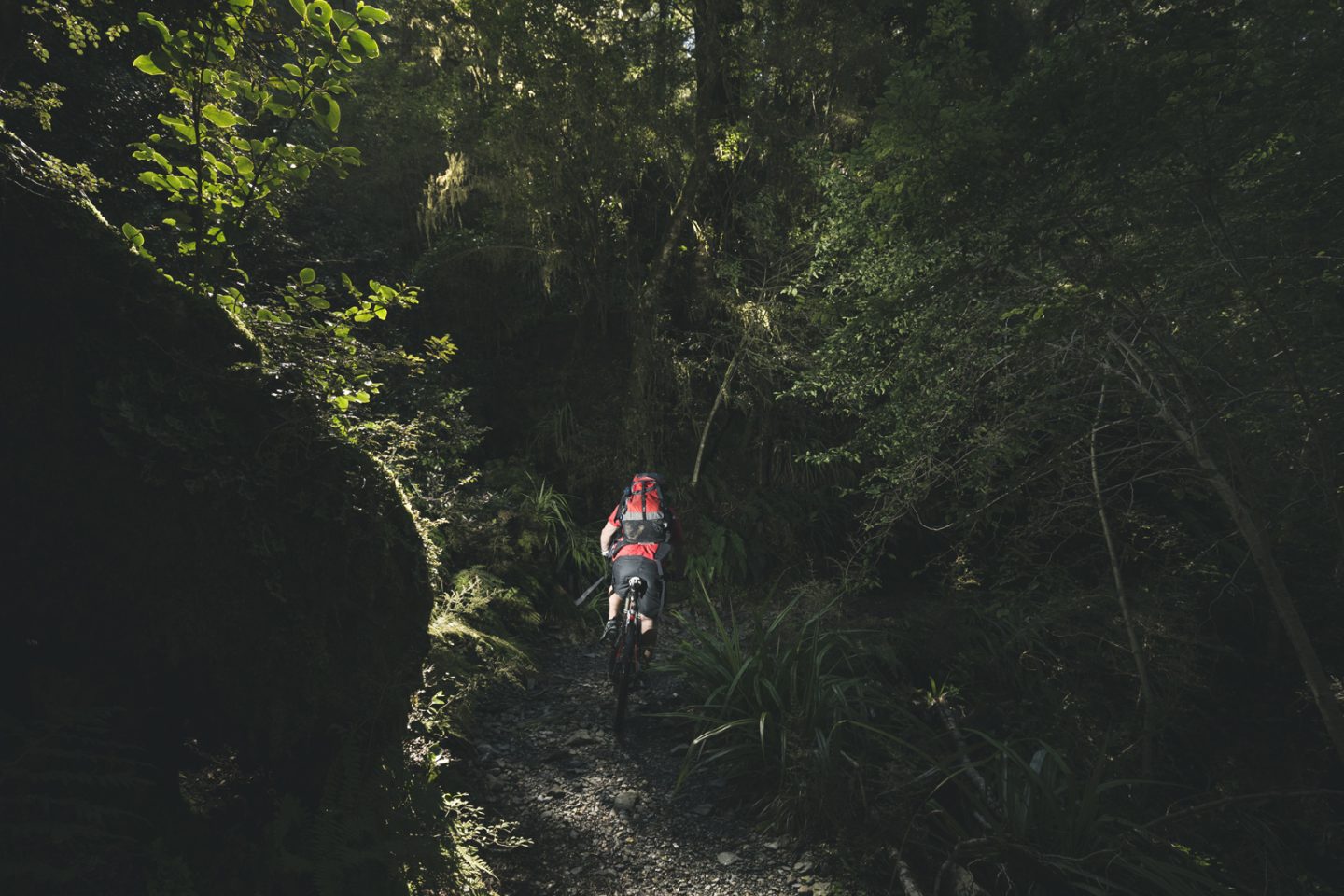 Day two was our longest but we were all eager to get amongst it. The first 7km decent was nothing short of epic. A rocky yet flowing single track set amongst native rainforest. Dave took an unexpected dip when he went over his handlebars while navigating a stream crossing. Luckily he was still in one piece and we carried on. The track opened up revealing golden Tussocks of the Gouland Downs. Shortly after passing the rustic Gouland Downs hut we entered a spectacular section of Beech Forest. The boys aptly named this section ‘Fangorn Forest’ due to its ‘Middle Earth’ appearance. The next 15km was a mixture of undulating single track. As we neared James Mackay hut we got glimpses of the Tasman Sea in the distance. After a much-needed feed, we prepared for a final 12.5km decent from 750m to sea level. If there was ever a track that was made for mountain biking this was it. Flowing singletrack with natural switchbacks, rocky sections and stream crossings. 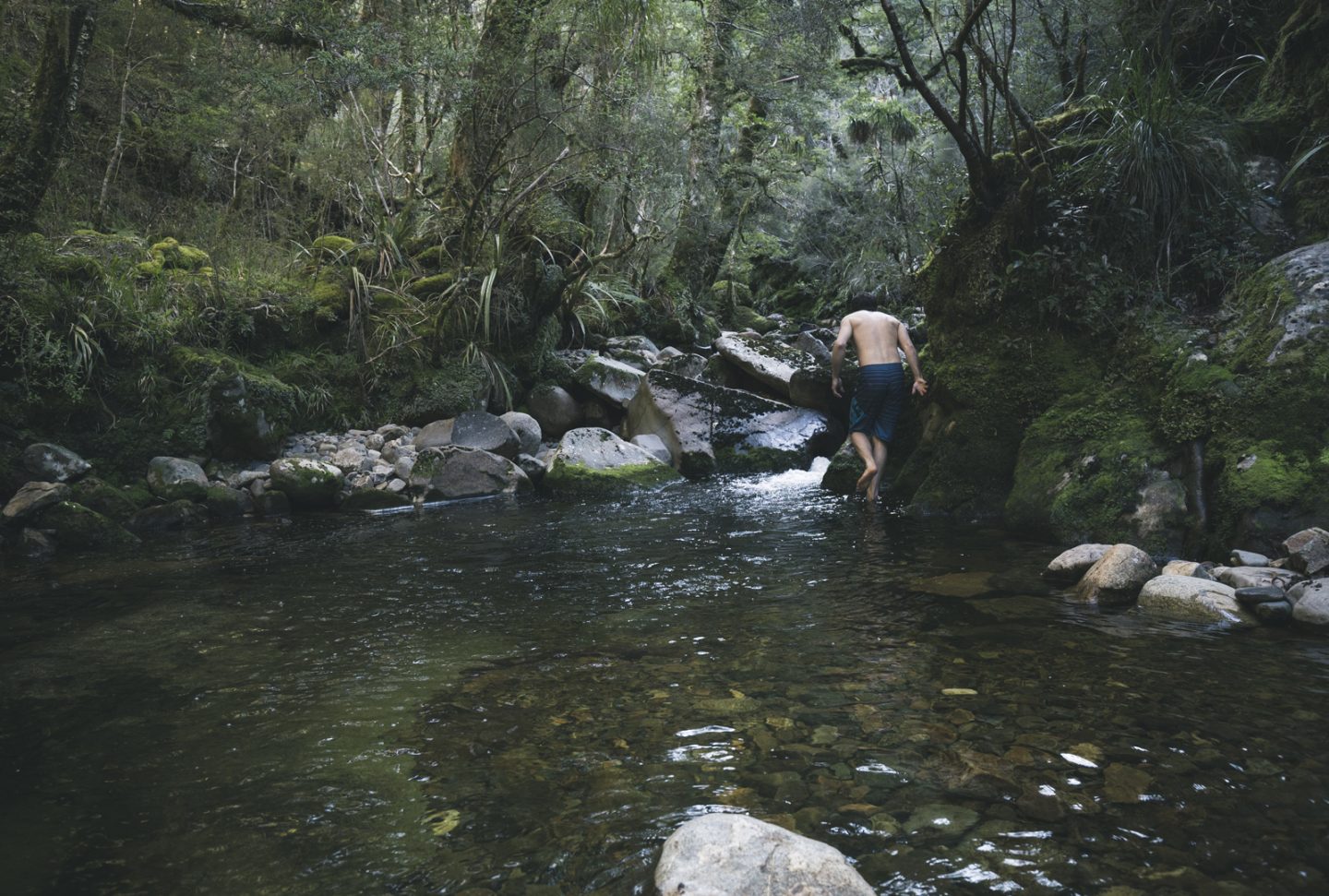 The final few km to Heaphy Hut was a picturesque ride amongst towering Nikau Palms, Limestone arches and untouched rainforest.
Before reaching the Heaphy Hut we bumped into local legend ‘Barefoot Pete’. Every Spring Pete travels from Westport to live the simple life amongst the bush and whitebait the Heaphy River. He has also helped build some world class mountain bike trails including the Heaphy and the recently opened ‘Old Ghost Road’. We were stoked when Pete gave us half a pound of freshly caught whitebait, eggs, bread and even butter! It’s safe to say we ate like kings that night and we even had some leftover to share with fellow riders. 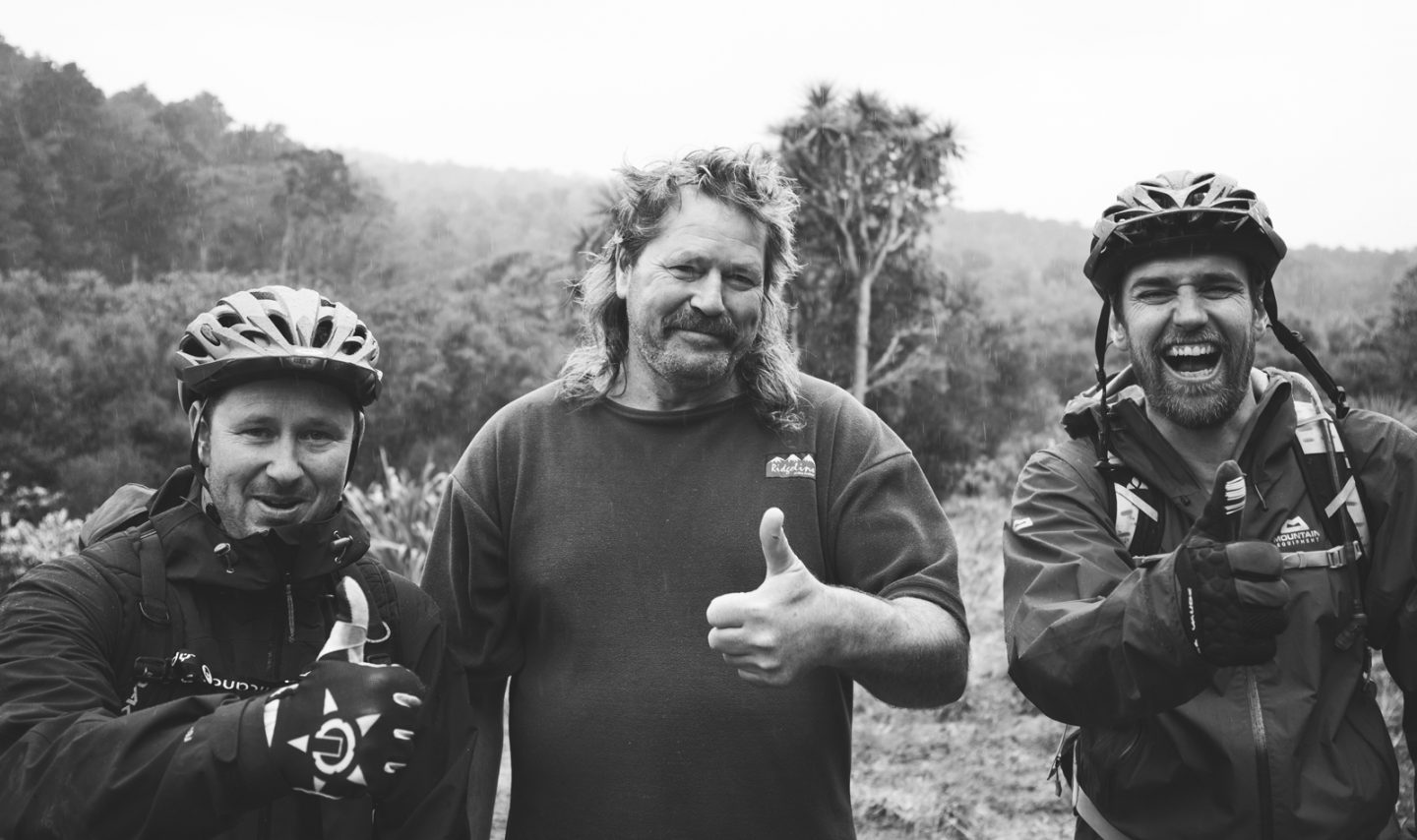 Another crisp, clear morning for our final 16 km ride to Kohaihai. We set off soon after sunrise and within a few minutes were amongst dense groves of Nikau Palms. Several swing bridges provided views down to golden sand beaches and pounding surf. As we neared Scott’s beach every corner revealed dramatic postcard views, where we couldn’t resist a few photo stops. 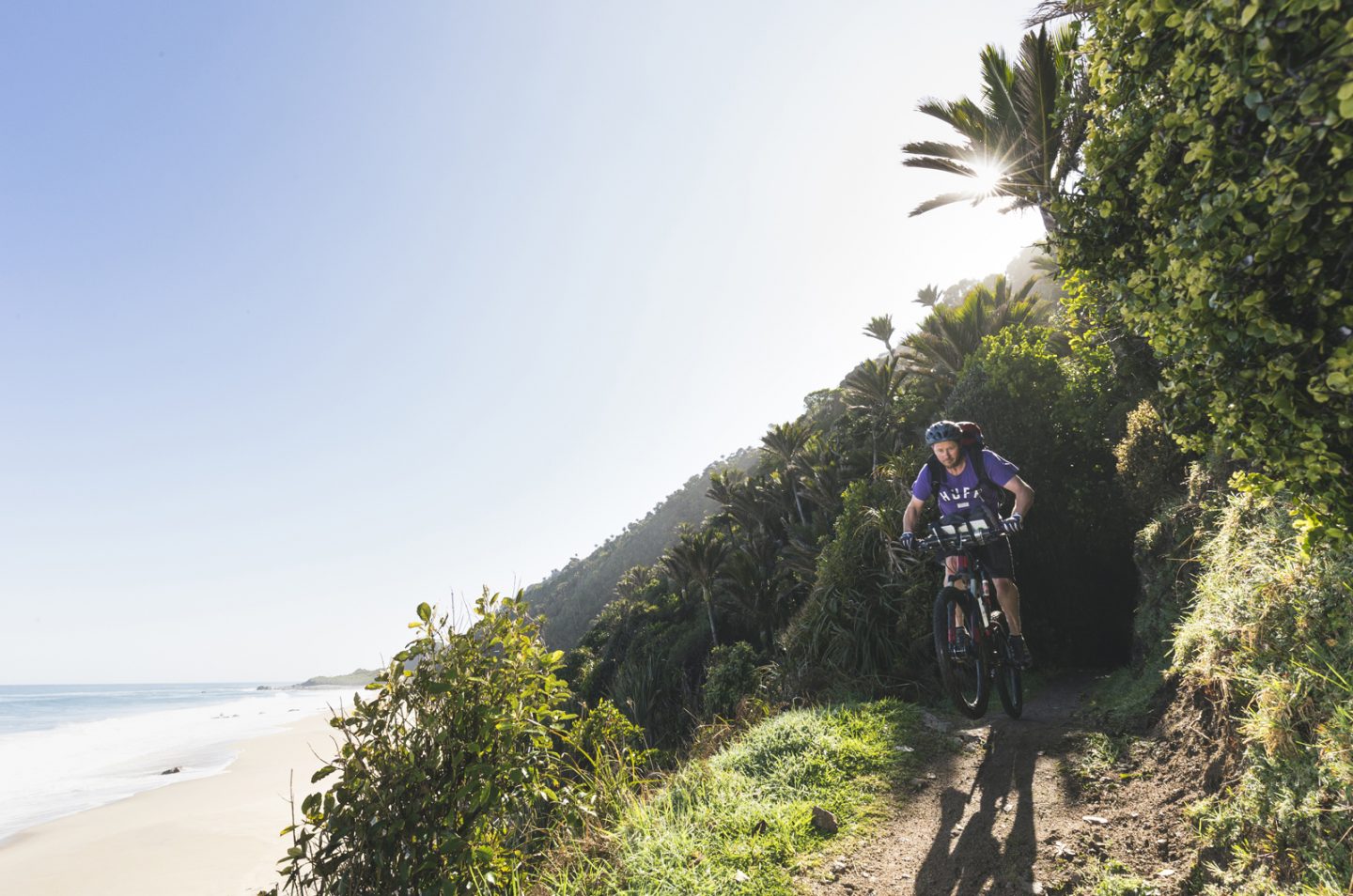 Kohaihai Bluff was the last short, yet grinding ascent before a fast-paced decent to Kohaihai. We were all ecstatic to reach the end with our bikes and bodies in one piece! It was the perfect getaway from the hustle of everyday life and a ride I would highly recommend. 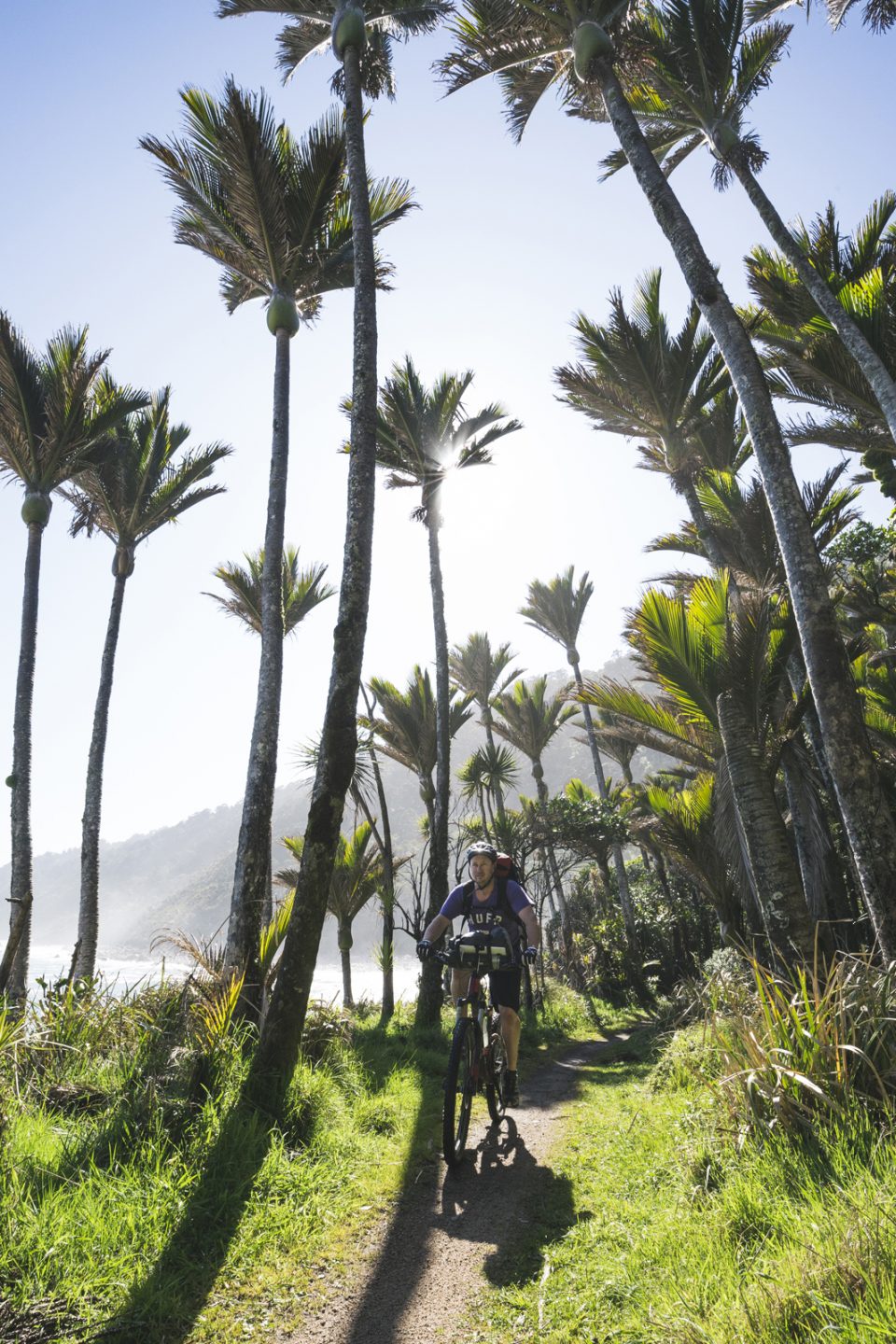 A massive thanks to our West Coast host’s for their hospitality including, Karamea Heli Charter, Last Resort Karamea and the Department of Conservation. For more information on the track please visit the links below.