On the first couple of days after I had arrived in New Zealand to stay for a year (which turned into three, but that is another story) I would sit in the kitchen of the hostel in Christchurch, shoving dinner into my mouth while listening to stories of fellow travellers, awestruck. They would tell of forests hiked and countries biked, of rivers rafted and summits conquered. I was admiring them like teenage girls admire popstars of the music industry. I wished I could be like them, fearlessly going out into the world and nature. But I could never be like that, I told myself. I knew that I wasn’t strong enough to carry a heavy trekking backpack. I wasn’t fit enough to hike for several days and especially up mountains. I would get lost and hurt and anyways, I just couldn’t.

I had always loved the outdoors though and living in New Zealand meant spending a lot of time in the outdoors. 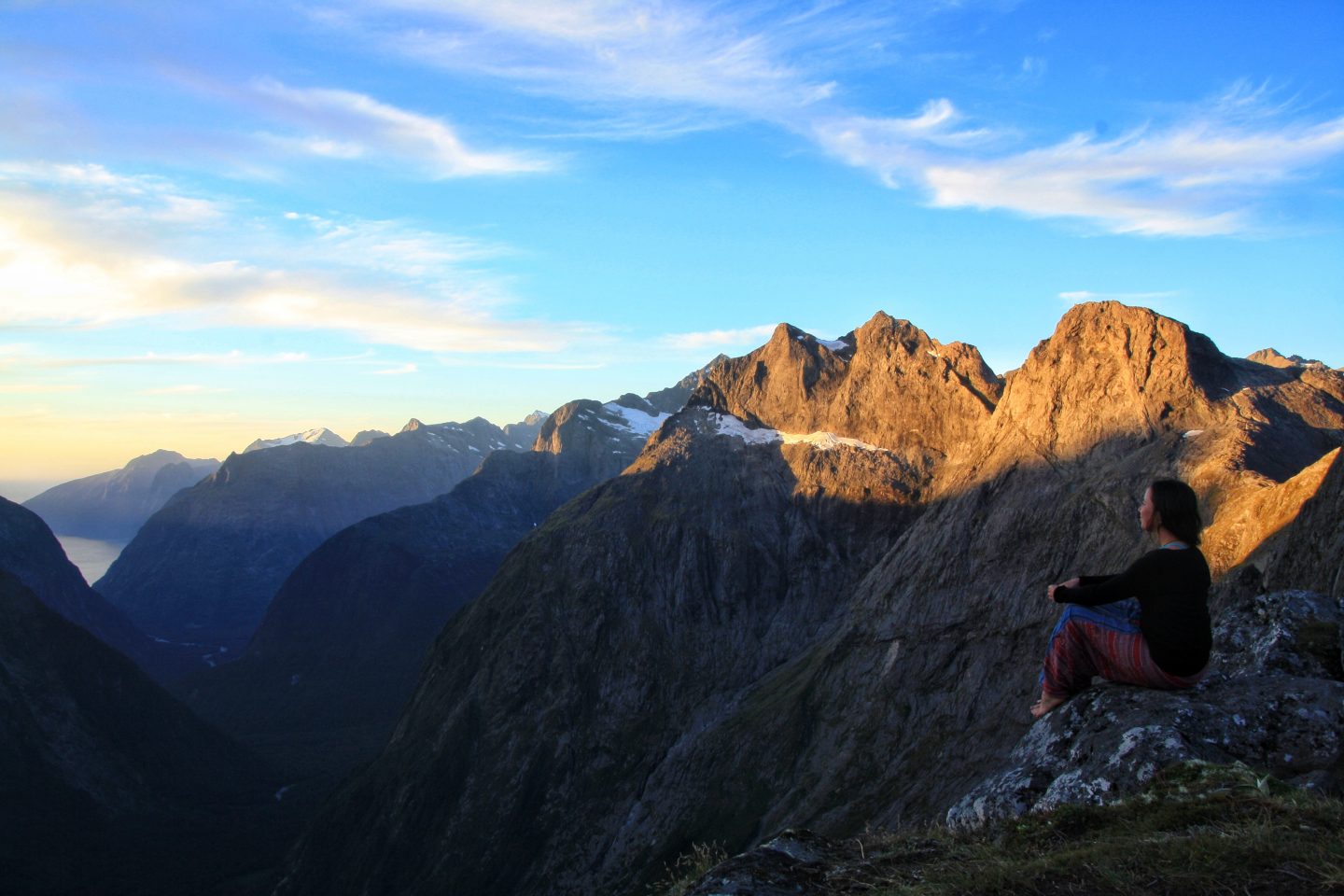 I would hike around the Port Hills in Christchurch and the Banks Peninsula while living in Little River. I would go on my first overnight hike on the Routeburn Track while travelling the South Island with my Hippie Van for seven weeks. Back then I was travelling with my dutch friend who was telling me of a hike he had done with a friend, but how they didn’t make it to the top because it was so hard and they almost got lost as there were no signs and they had to turn around as bad weather was coming in. We planned to do the same hike, although I almost didn’t want to go, it sounded scary and like something I wouldn’t actually enjoy. We went anyways and the way up was hard and later the way down was even harder, you had to pay attention because there wasn’t actually a real track. But when we reached the saddle and the whole world “on the other side” was opening up before my eyes, it took my breath away.

As the time went on I got stronger, fitter and more self confident.

And then I moved to Queenstown, living in a tiny hostel up the hill and I got to meet the most inspiring and wonderful people from all over the world. They wouldn’t take my “I can’t.”, they made me believe that I could do anything I set my mind to. We went out adventuring together for lunchtime breaks and Christmas days and late at night to watch the stars. And as I was surrounded by people that believed in me I started believing in myself and my own abilities. And I was longing to return to the mountains in the Fiordlands of New Zealand, to the sheer beauty of the place that had taken my breath away- Gertrude Saddle. 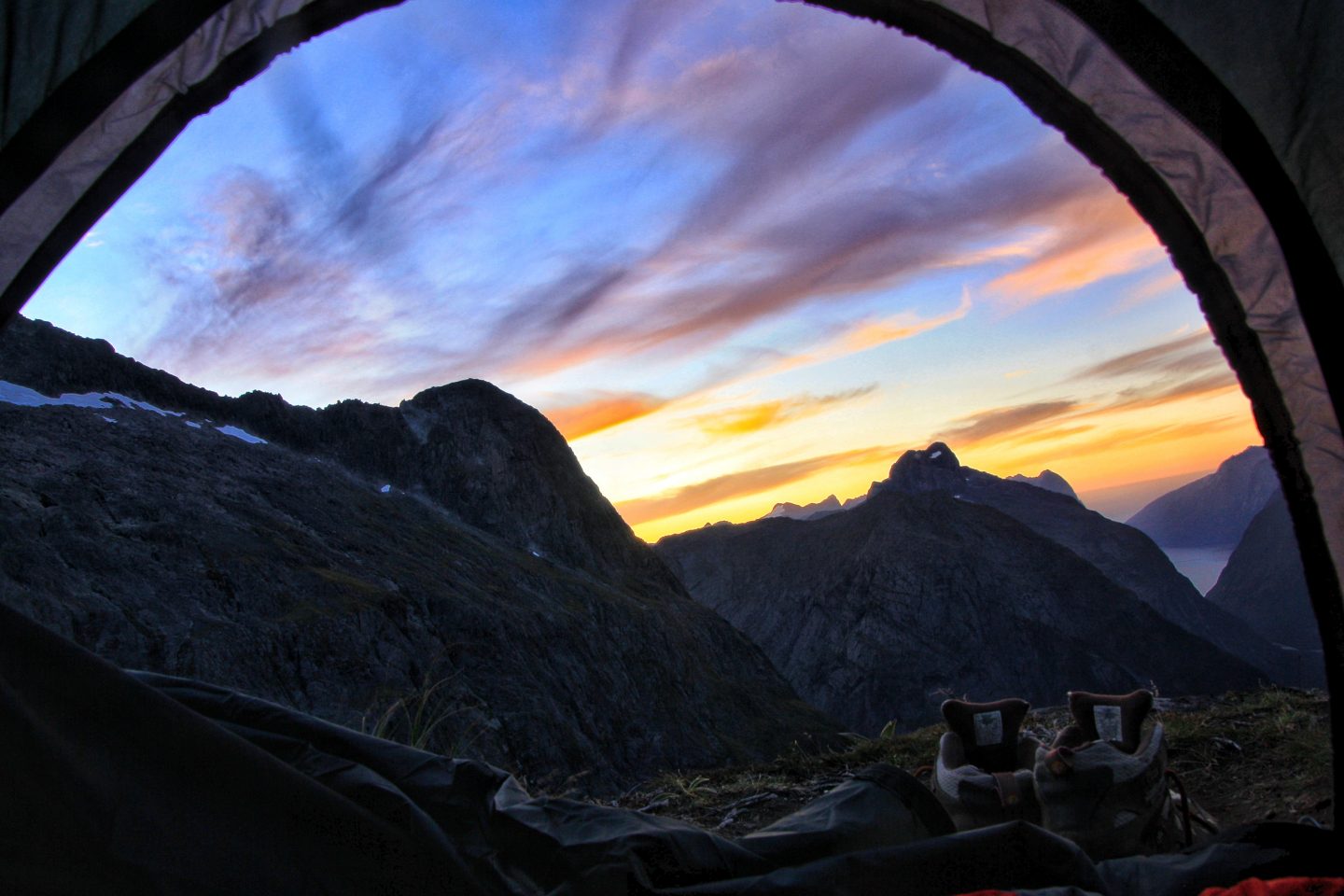 From what I was remembering it was hard and it would be even harder this time as I was planning to spend the night up there, which meant carrying my backpack full of gear up the naked mountains, over the loose rocks, climbing over boulders, trying not to get lost. But I had to go, my heart was literally aching to get back up there. And so I went. The weather forecast was promising (as it actually gets dangerous after it’s been raining/snowing), my backpack was packed and my friends were informed where I was going and when they should expect me back. Driving on the Milford Road had me giddily excited for my hike ahead, pulling into the little parking lot just before the Homer Tunnel in the early hours of the afternoon. Strapped on the boots, heaved on the heavy backpack and off I went. Through the valley and the scrubby bushes, jumping over little rivers and carefully stepping from one rock to the other over bigger rivers.

I took deep breathes and filled my lungs with fresh mountain air, whistling as I walked along the flat valley, happy as can be.

Not long though before the track started winding itself up and up and up. Alongside a stream carving it’s way through the rock face and splashing as a waterfall down slippery rocks, alongside little stone statues that had been left by fellow hikers, indicating the “right” way, as there was no actual trek on the rocky terrain. My eyes wandering between the horizon to not miss any stone statues and the ground, where my feet were trying to get a grip on the loose layer of rocks. Later the pebbles gave way to the naked rock face, still going up, steel chains in place to help you heave yourself up onto the next giant rock, my trekking backpack waying me down, but surprisingly helping me stay balanced. And even though it still isn’t the easiest hike, it was way less complicated than my memory had made me believe. A year of hiking Queenstown’s mountains was definitely paying off!

I made it up to Gertrude’s saddle and even though I knew what to expect, it took my breath away once again. 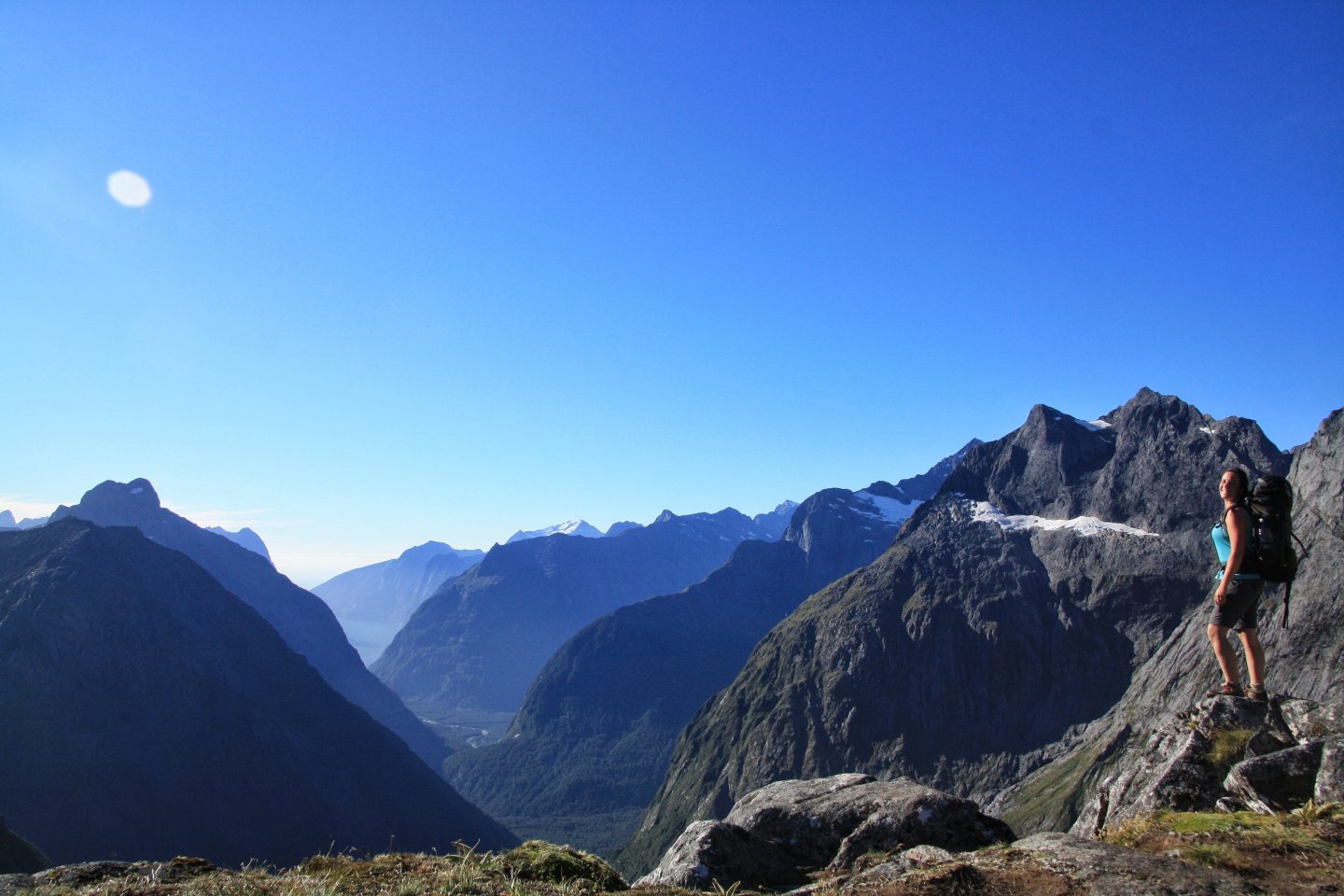 The side of the mountain dropping straight down in front of me and the Fiordlands opening up before my eyes, the valley framed by high snow capped peaks and above it all the bluest sky. A river making it’s way through the forest deep down under my dangling feet, slowly flowing all the way into famous Milford Sound in the distance.

It wasn’t long before the last few day hikers got on their way back down and I had the place all to myself.

I set up my tiny tent right at the edge, overlooking the view that had me feeling like I was finally coming home, luckily not the slightest wind blowing. 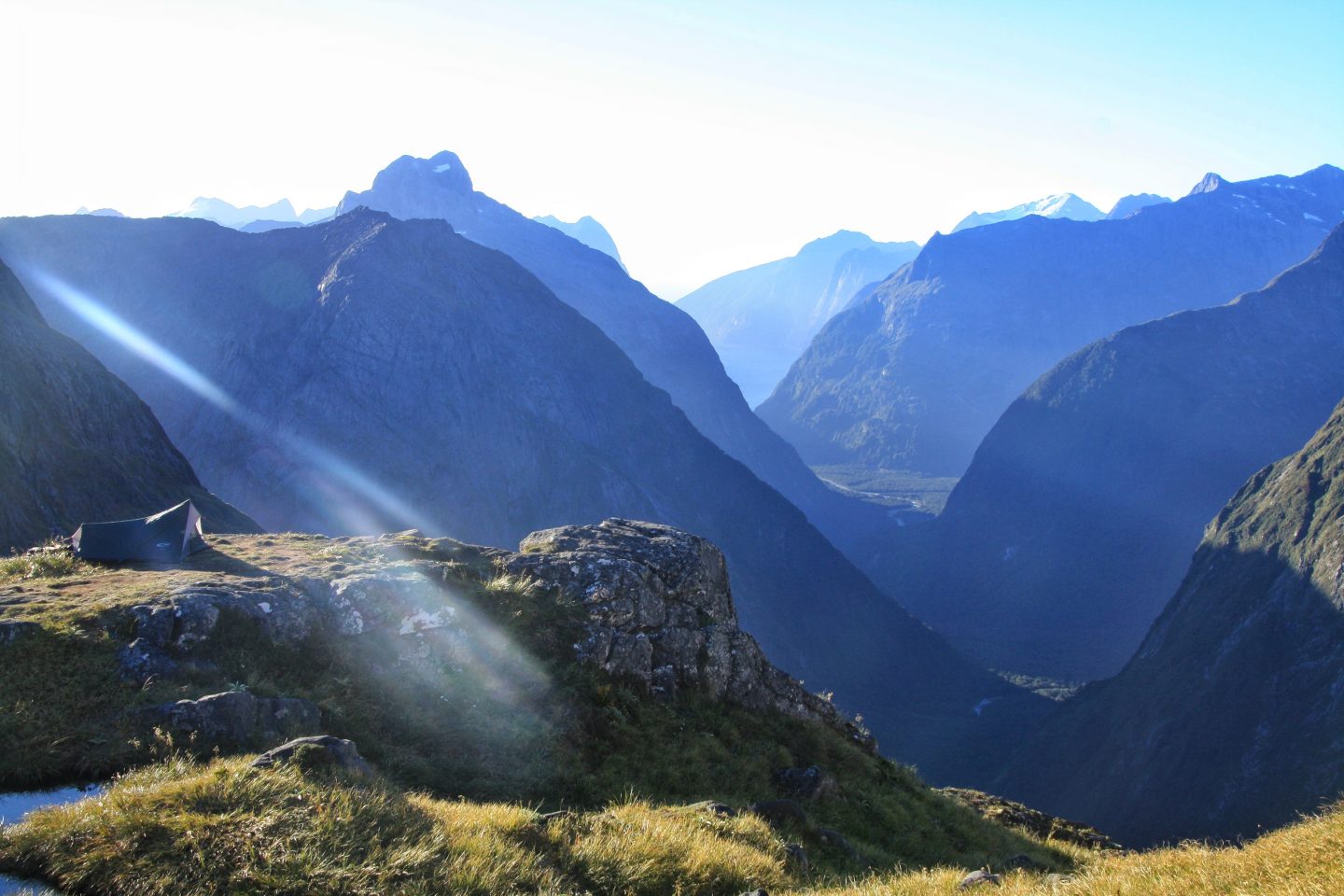 I spent the last couple of hours of daylight exploring the area around me, slurping freeze-dried Banana Smoothie (I promise it tasted better than it actually sounds like) and making friends with the little bird that wouldn’t leave my side. The temperatures dropped quickly once the sun went down and I huddled up in my sleeping bag in front of my tiny house, dinner bubbling on the tiny stove while the setting sun painted the sky and the Fiords in the most gorgeous colours. 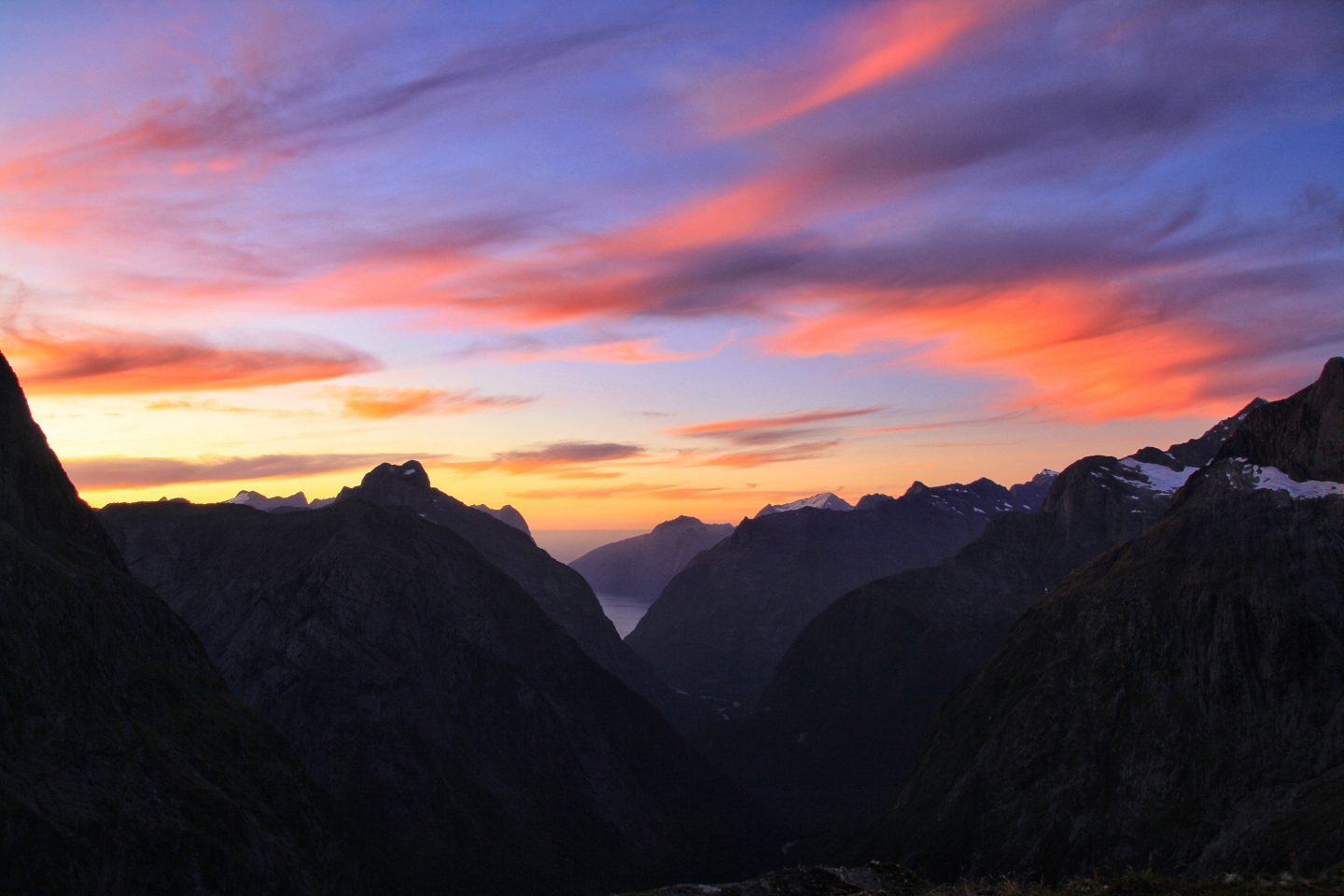 I told my new bird-buddy Good Night, wrapped myself into my sleeping bag and watched the first stars and the Milky Way appear as night fell, the calming sounds of the nearby waterfall rocking me to sleep.

The following day started like the one before had ended- with the sky putting on an incredible light show as I was munching hot oats, Mr. Birdie by my feet. 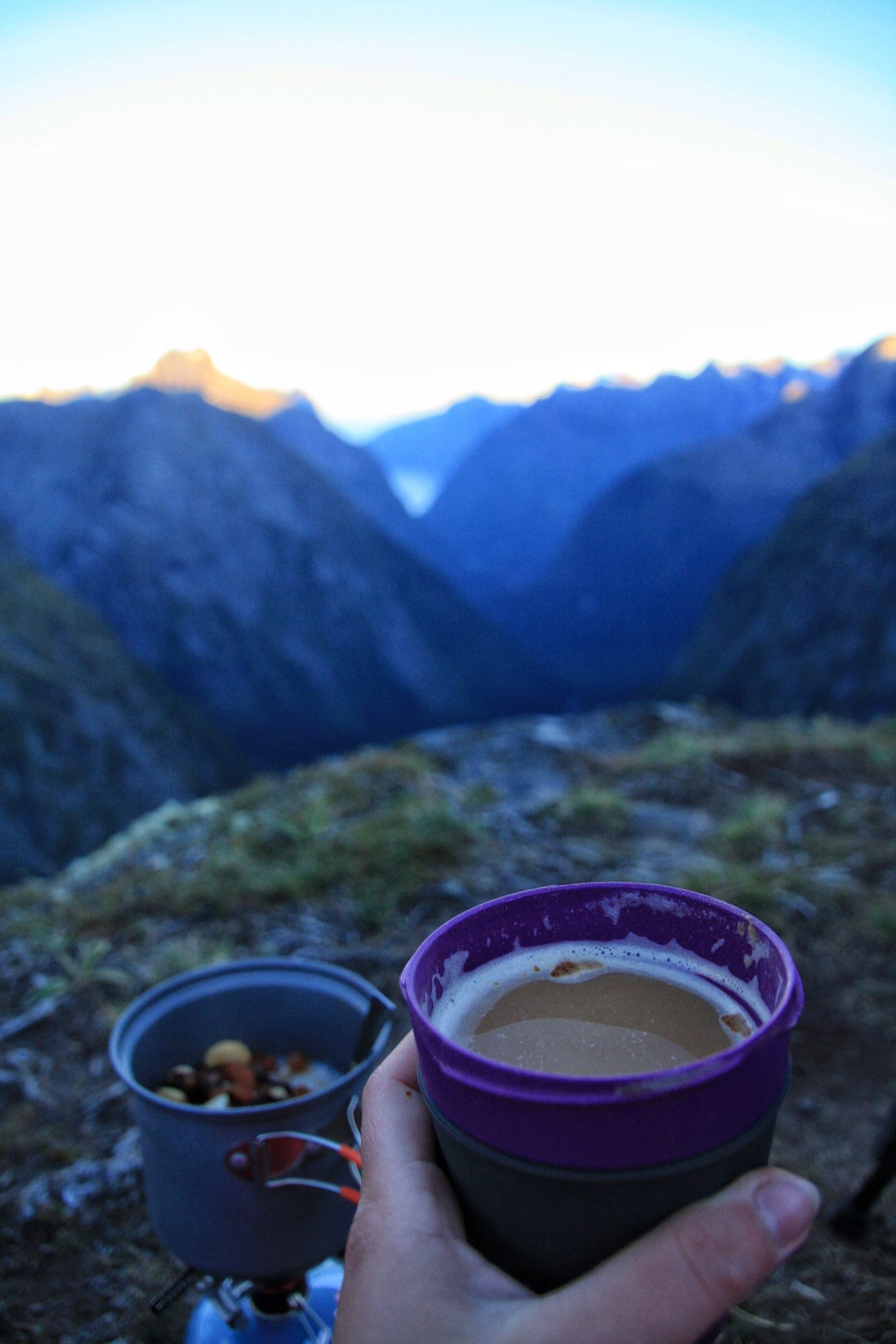 As I packed my things to get going I felt a deep-down happiness inside me like I hadn’t known before.  Of achievement and the highs of adventure, of stepping out of the comfort zone and finding a world out there that’s more wonderful than anything you could have ever dreamed of, of being out there and doing it and feeling that you’re living life right.

On my hike back down, the dew on little leaves glistening in the early sun once I made it to the bushy valley terrain, I didn’t meet another soul until just before the parking lot- four guys,  looking at me curiously “How are you already on your way back? Did you camp up there at night?” “Sure did. Beautiful experience!”  And them- awestruck at a solo girl conquering mountains over night.

What I’m saying is- if I can do it, you can do it. Don’t believe the limits your mind is trying to hold you in. Go out there and explore and do what makes you happy.