In February 2011, I walked across the Wahiba Sands by moonlight with my girlfriend Laura (now wife).
The Wahiba Sands (also called the Sharqiya Sands) is a small but prototypical desert – about 100 miles long and 50 miles wide and filled almost entirely with row after row of sand dunes. It’s only a couple of hours drive from Muscat, Oman, and thus popular with tourists.

The itinerary was simple: We drove as close as we could to the western edge of the dunes and parked our car. Our rucksacks were loaded with 10 litres or so of water and enough food for 2 or 3 days then walked east until the dunes stopped. We made a bee line up to the road and hitched back to our car.

The trip was planned to coincide with a full moon which meant it was easier to walk late in the evening and early in the morning when it was cooler.

Although very brief, this remains one of my all-time top expedition experiences.

Diary from the Sands

I was amazed that we found it at all. I had zoomed in as close as possible on Google Earth to trace the fine lines of what looked like a dirt track ending at the western edge of the sand dunes. I jotted down the coordinates, punched them into the GPS we had borrowed and was trying to navigate through the maze of Omani village back streets. Hard enough in daylight, let alone the darkness that covered us as the clock approached midnight. Somehow we found the literal end of the road (it turned rather suddenly into sand), parked up and pitched for the night beneath the glorious orb of a full moon.

It was no coincidence that the lunar cycle was reaching its zenith this weekend. We had planned this for many months, coordinating the brightest nights with our social calendar to find the perfect time to complete our desert crossing. We rose early the next morning and set a course east. A bearing we would more or less be following for the next 60km.

The Wahiba Sands are a desert in every sense. Hot, dry and filled in their entirety by wave after wave of steep sided sand dunes.

The dunes run north-south in parallel lines and our crossing would cut perpendicular across them all. Harder work than following one of the valleys along the line of least resistance but a lot more fun we thought. The Sands are well used by tourists, locals and Bedu alike. Most, if not all, valleys between the dunes have jeep tracks running through them, there are small settlements scattered throughout the area and a few tourist camps too.

This was not remote desert exploration. It was a challenge we had set ourselves as people new to the desert. We chose to do the trip “unsupported” in part because it made it purer and more challenging but mostly because it was so much easier than arranging anything else. Our plan was simply to carry everything we needed to get us to the road on the far side of the Sands then hitch back to our car.

We each carried 9 litres of water and three days of food. I estimated our packs to weigh in at around 17kg (37lbs). Not heavy by military standards perhaps but enough to make us groan under the burden. Even before the sun had peaked across the horizon in front us, sweat crept onto my brow as we struck up the face of our first dune.

We supposed that there would be 26 such dunes to cross. Each one was up to a hundred metres or so in height and a kilometre or two wide.

Sometimes it was hard to tell where one dune finished and the other started when we were lost in a sea of rolling sand hills but it was our easiest measure of progress; like counting lengths in a swimming pool. It wasn’t until we had slogged up half a dozen that John, who had joined Laura and I for the trip, “remembered” that due to the prevailing winds, the dunes were always steeper on the western side. A fact that may have been more useful before planning a west-east crossing.

The logic behind timing our trip to coincide with the full moon was so that it would be bright enough to walk even when the sun wasn’t up. This was a hot desert and even now, in winter, it would be tough going to walk through the heat of the day. Doing so would waste precious water on sweat too. So come midday, we sought the shelter of a tree and our tarpaulin to get some rest then pressed on in the late afternoon and into the night.

It is a rare treat to watch both the moon set and the sun rise in a single sitting but that is how we started our second day.

Twelve hours later we would catch each celestial body in the reverse role but there were many more dunes to cross before we reached that point.

So tired was John the night before that no sooner had he declared it was time to stop for the night that he was asleep in the tent, fully clothed. As such, we weren’t as surprised as we might have been, though not any less disappointed when he said he would leave us that morning. Laura and I split his tent between us, glugged down some of his spare water and bade him farewell as he walked northwards out of the valley to hitch his way back to Muscat.

We had covered a slightly disappointing 20km the first day. We knew that was an underestimate based on a straight line and that walking through sand was never going to be easy, but we also knew that excuses wouldn’t get us any further east. We got our heads down before the sun was too high and marched across another ten dunes before lunch, as many as we had done the entire previous day.

Within seconds of collapsing at our designated lunch spot – a lonely tree perched in the sand halfway up a dune – the wind picked up. With the wind in the desert comes sand. We battled to weigh down the guy lines of our tarpaulin by filling plastic bags with sand but it was never going to give us the shelter we needed. Sand was flying everywhere.

After another six hours’ marching, we were well into the eastern half of the Sands. Where previous valleys had seen frequent 4x4s passing by, that afternoon we did not see a soul. More greenery appeared and the dunes became less like orderly rows and more like an endless choppy sea. Camels roamed freely and herds of goats grazed on what plant life they could find. Lizard and dung beetle tracks abounded, and even the tell-tale wiggle marks of snakes were spotted between tufts of grass.

Fatigue began to set in. As we crested each dune under the tranquil light of the moon we would silently hope that it was the last but every time our optimism was thrown back into our faces with the sight of yet more dunes silhouetted in the distance. Tired and feeling the thirst more than ever, we pressed on without speaking, willing our legs up those short, sharp sections of sliding sand that required otherwise tired muscles to work at double speed to make any progress. But as 10pm arrived and the eastern plateau failed to materialise, we made camp for another night.

The moon was behind us and illuminating the thick mist in the valleys below. We each had a litre and a half of water left and, we reckoned, some three hours to the edge of the dunes and another 10km to the road from there.

Since last night’s hike I had anticipated a single moment of glory, climbing a wave of sand to see the empty expanse to our east. What actually happened was far more gradual: the slow realisation that the dunes in front of us were slowly getting lower and that, in the distance, was the gravel plain which spelled the end.

When we finally reached the foot of the final dune we ceremoniously emptied the sand from our shoes one last time. Most of the crossing was completed just wearing socks, far more comfortable and responsive than wearing shoes, but when light was low we cautiously opted for better protection from scorpions.

Back on solid ground we were surprised to discover how easy it was to walk having become accustomed to the effort of traversing sand.

Using our map (printed off Google Earth), we took a bearing that we figured would get us most swiftly to the road. We each took hopelessly optimistic guesses at how long it would take to reach the distant pylon and ended up walking for longer than the two estimates combined.

With the sun now beating down on us hard and a mere 100ml in my water bottle we were anxious to get picked up swiftly and not suffer too long in the heat. We needn’t have worried. This was Oman. Within seconds of dropping my pack to the floor, the very first vehicle to pass my extended thumb pulled over and offered us a ride. 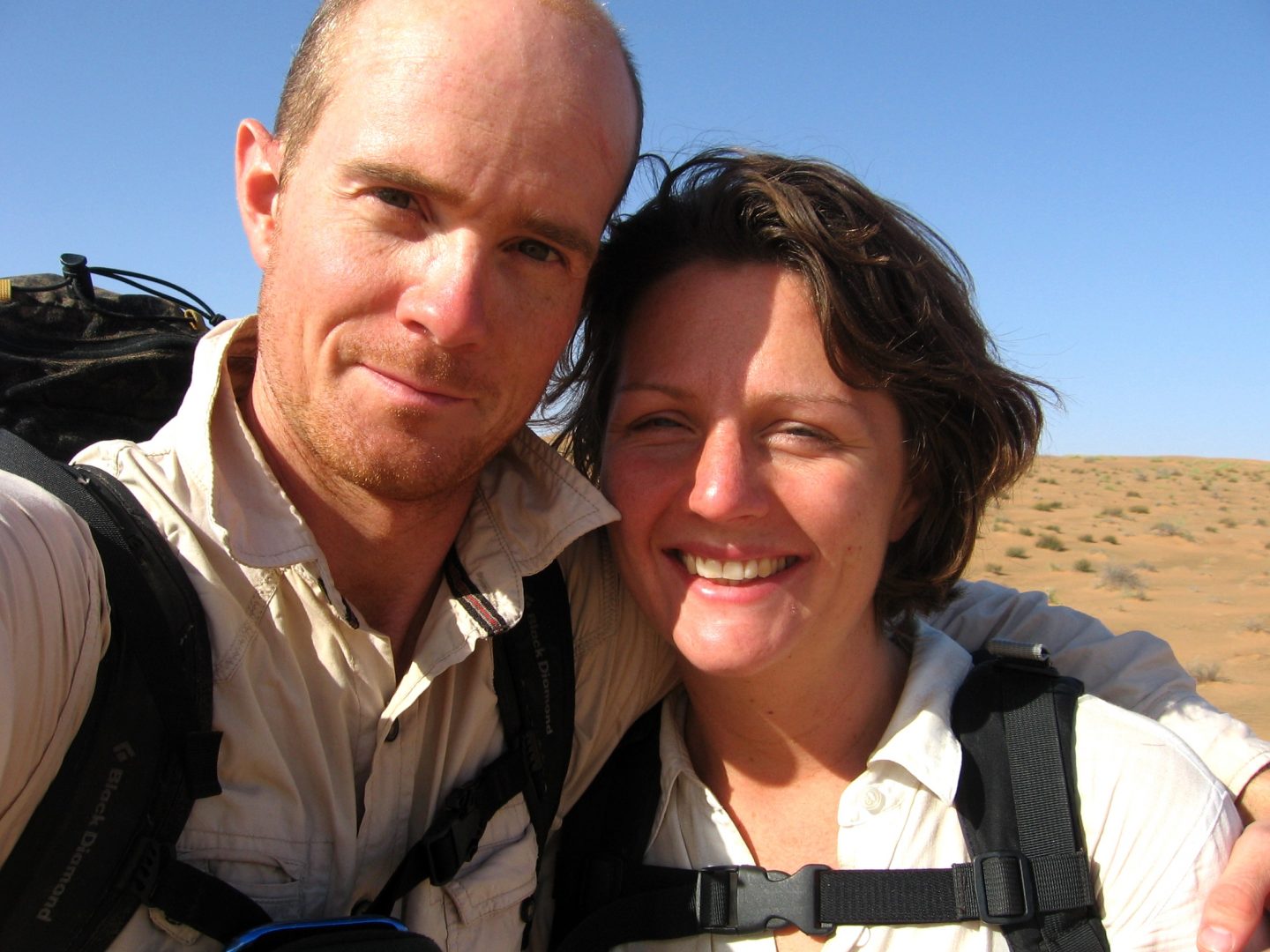 We had crossed a desert.

Written By
Tim Moss
More from Tim Moss
In March 2017, Laura, my wife, and I traveled to Lake Baikal...
Read More